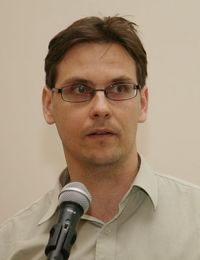 Historian, the editor in chief of the journal Múltunk, earned his PhD at Eötvös Loránd University (Faculty of Humanities) in Budapest, currently research fellow at the Foundation of Political History, Budapest, and author of the books Politikai újságírás a Kádár-korban [Political Journalism in the Kadar Era] and A származási megkülönböztetés megszüntetése 1962–1963 [The Abolishment of the Discrimination by Social Origin 1962–1963]. He was the research fellow of the Imre Kertesz Kolleg at the Friedrich Schillet Universität, Jena, and between 2013 and 2017 worked on the OTKA supported project The Opening Country: Cultural Transfers and East-West Cultural Exchange and Hungary in the Cold War (1953-1975). He held the János Bolyai Scholarship of the Hungarian Academy of Science between 2014 and 2017. From 2017 November he has lead the OTKA FK [Young Researchers] research group with the topic Western Impacts and Transfers in Hungarian Culture and Social Sciences in the 1970s and 1980s.

His main research profile is: postwar Hungarian history – history of cultural policy and transfers, of press and media and of political humour.

The Vanishing Soviet Utopia in Hungary in the Light of de-Stalinization – Soviet Union as the Land of Modernization in the Hungarian Press 1950–1958
Central European Papers, 2014/1. 132–149.

Education and the Inspiring of Hatred

In: Regimes and Transformations. Hungary in the Twentieth Century. Edited by István Feitl and Balázs Sipos. Napvilág, Budapest, 2005. 325–351.